Playing catch-up: Two posts for the price of one! 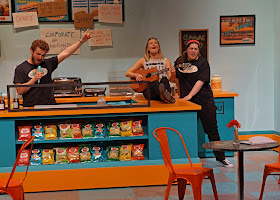 With other long-delayed projects not related to theater or journalism now underway, I've gotten a bit behind in my blogging. So with a few minutes to spare, I guess it's time for a little catching up - on two recent shows I've seen!


I'll never look at my local Subway quite the same again...


Last weekend I was finally able to catch "American Hero," the debut production of the Detroit Public Theatre, and if the sold-out house is any indication, founders Courtney Burkett and Sarah Winkler have launched an endeavor that will certainly help increase the city's reputation as a destination-spot for arts and culture - especially along the busy Woodward Avenue strip that ties Midtown to Downtown. Housed in the Max M. and Marjorie S. Fisher Music Center, home of the Detroit Symphony Orchestra, parking is nearby and plentiful, with numerous dining and refreshment options throughout the area both before and after a performance.

In short, it's the perfect place to launch a new theater!

For its inaugural effort, the co-founders chose a rather unusual script - one that has no name recognition, as few people outside the industry have ever heard of it. While that might seem counter-intuitive, their decision is actually a smart move, as it signals their intention to be "fresh and fearless" in their choices - in other words, different from what one might expect from a company that's partnered with a world-renowned institution whose patrons are often unfairly stereotyped as old, white and rich. (The DSO audience on the night I was in the building was anything but, thanks to successful outreach efforts by the orchestra's excellent marketing team. It had one of the most diverse crowds I've seen at any cultural event in recent months.) And isn't it a standard belief that this type of crowd tends to prefer the tried-and-true rather than programs that push boundaries?

"America Hero," then, is the story of a Subway-like sandwich shop whose owner abandons it after its grand opening, leaving its three employees high and dry with no one to lead them. (Or pay them!) Bess Wohl's script, then, is a study of human nature - and in particular, when faced with lemons, do the three lost employees step up, take charge and make lemonade? Or are they squeezed dry by their predicament and fold along with the business?

What I will say, though, is this: After a long (but very smart) birthing process, Detroit Public Theatre should be proud of its first outing. What was once a rehearsal hall has been transformed into a gem of a black box theater, with perfect sight lines and great acoustics. (One complaint I heard multiple times throughout the performance, though, should be fixed by the next show on the schedule, I've been told: The stadium-style seating isn't raked enough; most people beyond the first level had problems seeing action that took place whenever the actors weren't standing. And with this show, that happened quite a lot!)

The stage for this production is well served by set designer Monika Essen - one of Detroit's crown jewels - whose work is so real that it could almost be moved directly to an available downtown storefront and used to serve hungry customers. And its complimented quite nicely by Neil Koivu's lights.

Burkett's direction kept the show moving, and each of her actors - Milan Malisic, Maggie Meyer, Lisa Michaels and Lynch R. Travis (in multiple roles) - created unique and engaging characters. And while I laughed - a lot - throughout the show, I had trouble hearing one of the actresses, who talked very softly at various times. And I suspect this might have been a slightly "off" night, as it appeared actors were arriving on stage a little behind schedule at times (one actor, for example, was still changing costumes when he entered following a scene change - and the lights had already come up), and there were a few times when the flow of the dialogue didn't seem to gel as it should.

All told, however, I'd give "American Hero" a very solid "B" - a notable grade for a first effort. And the rest of the season - three shows beginning in January with Eric Gutman's "From Broadway to Obscurity" and ending in May with the much-anticipated "Detroit '67" - promises to live up to the founders' goal of offering theatergoers a great variety of programming.

The Detroit Public Theatre has the potential to grow and mature into one of Detroit's leading arts organizations. And I can't wait to be along for the ride!


No fear here: Only masters at work

Although the show has been closed for a few weeks - I attended its final performance - I wanted to acknowledge the superb work of Sandra Birch and John Seibert in the best-I've-ever-seen production of "Who's Afraid of Virginia Woolf?" at Performance Network Theatre.

This is a script that's not for the easily intimidated, as author Edward Albee's play is a roller coaster ride of emotions for actors to travel - and one false step can bring down an entire production. But director Suzi Regan had two aces up her sleeve - namely the multiple award-winning chops of Birch and Seibert - and each proved why they sit among the upper echelon of Michigan-based talent.

At first I felt bad for the other two actors in the play - Nick Yocum and Victoria Walters Gilbert - who, initially, must have been intimidated by the two powerhouses. But they, too, were along for the ride, and guess what? Rise to the challenge they did!

Together, then, the four served audiences with one of the finest nights of theater I've experienced in a while. (Jennifer Maiseloff's fine set deserves accolades, as well!)

Whether or not the production will become a catalyst for audiences to return to the financially ailing Network in greater numbers than in recent times isn't yet known. But if quality matters, it should - and I'm keeping my fingers, toes and eyes crossed that the Network will be here for years to come!