A Tale of Two Critics (or, Don Introduces Jenn to Open Book Theatre - but will they agree on what they saw?) 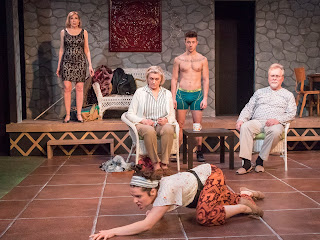 Some of my readers may not remember this, but not long ago most daily newspapers in the state had a staff theater critic. So did several of the weeklies, or at the very least a freelancer or two. I loved the fact that we had multiple voices discussing the work produced by our theaters, but what was especially fun was the collegiality among the critics. So much so, in fact, that many times after an opening night performance a gaggle of critics could be found socializing and discussing the latest industry gossip at a nearby local pub. (We were also the first to pick through the buffet table some theaters had on opening night, but that's a different story.)

The one thing we didn't talk about, though, was the show we had all just seen. It was a rule we stuck to no matter what, as it could be very easy for one critic to unintentionally influence the opinion of another. (As an aside, this actually happened to me once at one of those gatherings; the husband of a critic made a comment about something that occurred during the performance, and as I was writing my review the next day I kept discovering that what I wrote sounded more like him than me. So I removed the reference from the review altogether.)

I miss those days, when Jenn McKee (then of The Ann Arbor News), Judith Cookis Rubens (then of The Oakland Press), Marty Kohn (then of the Detroit Free Press), Carolyn Hayes (the former Rogue Critic) and I (then of Between The Lines) would mix and mingle after a show. Friendships were forged that continue to exist to this day.

I was reminded of this just this past Friday evening when Jenn accompanied me to Open Book Theatre to see its production of Vanya and Sonia and Masha and Spike. She had never been there before, but based on past discussions we'd had - and what she'd heard and read elsewhere - it was decided that she'd join me at that evening's performance. We even rode together.

And even though neither of us has a current gig in the media as a working theater critic, we still held to the same policy as before: Thou shalt not talk about the play until the reviews have been published or posted.

Except that each of us briefly violated it at some point during the evening. In the lobby at intermission I asked her, "See what I mean about the work they do here?"

And on the ride home, she said," Sorry, I know I shouldn't, but I can't wait." She then proceeded to make a brief point about one particular aspect of the show, to which I pretty much agreed.

The total time spent violating our Golden Rule? About 45 seconds. That's it.

And so I can't wait to see what Jenn writes about the show. Will she agree with me that director Angie Kane Ferrante had a particularly keen eye for casting the right people in the right roles? That Lindel Salow and the always-delightful Connie Cowper were simply wonderful as aging siblings who never left the family nest? Or that Wendy Katz Hiller lit up the stage as their famous sister who'd supported them and their now-deceased parents all those years? And will she agree that the very limber Alexis Barrera brought much laughter and physicality to the stage as the somewhat-odd sooth-saying cleaning woman? I do know we agree that the adorable Kyle Kelley - who struts the stage for much of the show in nothing but tight underpants - likely hasn't eaten a cookie or piece of pie in many years and is perfectly cast as Spike, the play's young, hunky stud muffin. But what will she say about his acting chops? (In my opinion, at times his line delivery seemed a bit wooden, but I wasn't sure if he was directed that way to indicate that his character's status as eye candy trumped everything else, including his personality.)

Overall, I suspect she'll be as impressed with the show as I was. And I also think she's discovered what I did about this company a handful of years ago: that the work they do is of very high quality. And I also bet Open Book will become a regular part of her reviewing schedule.

The Bottom Line: Open Book Theatre Company is a class act from start to finish, and the shows they produce are of the highest quality. As I've said before, of all the young theaters we're blessed to have in Southeast Michigan, I suspect Open Book will be among the few that will survive long in to the future.

Vanya and Sonia and Masha and Spike runs through March 18. For complete show information, CLICK HERE.

UPDATED March 9: To see what Jenn thought of the performance, CLICK HERE. 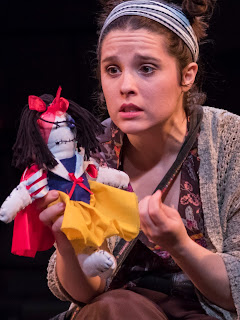