Not so lost at Slipstream 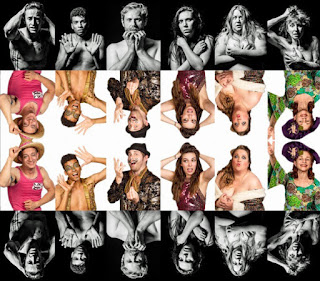 As I posted on Facebook last night, I was at the Friday evening performance of “Lost in 3 Pines” at Ferndale’s Slipstream Theatre Initiative, which is playwright Maxim Vinogradov’s second script to win the prestigious Hopwood Award and the Dennis McIntyre Prize from the University of Michigan, where he currently double majors in English and film, and minors in playwriting. (Given the tough competition he was up against, winning one of those awards is amazing enough; winning both twice is stunning.)

So on the way home, my guest – who frequently joins me in my theater travels and who especially loves Slipstream – asked me, “So…what are you going to say about this one?”

As we drove back to my house, he said he was on the fence about the production, mostly because he hadn’t figured out how all the pieces fit together. “I just didn’t understand it,” he said with a deep sigh.

To be honest, I didn’t either – at least certain aspects of it. And neither did many (most? all?) of the patrons who stayed around after the performance to participate in an informal talk-back – which I normally don’t do. But since I was there as a theatergoer and not a critic, I decided to see what everyone else thought of the production. What I learned is this: My friend and I weren’t alone in our confusion. Or more accurately, I suspect, is this: Everyone interpreted what they saw through their own lenses and filters and viewed the results a bit differently. And that includes the actors and the director.

So as everyone compared notes and shared their observations, the puzzle pieces started coming together for me. But not totally.

The picture got clearer as my friend and I got closer to home. As we talked about things one or the other of us weren’t sure about – again, something that’s verboten when I’m functioning as a critic – more lights came on and Maxim’s vision got clearer. But so did something else.

As theatergoers, we’re used to being rather passive when we’re watching a play. Yes, we laugh or clap or sing along, but rarely do we exercise much brain power as the story unfolds; we simply sit back, observe and let it all soak in.

With plays such as “Lost in 3 Pines,” however, Maxim challenges his audience to not only watch and observe, but also to actively concentrate on every word that is said – even words or lines that seem unimportant at the time. To miss even a syllable could lead to confusion as the story roller coasters its way to its unexpected conclusion. As such, it’s part cryptogram, part word seek and part mental acuity test all rolled into a 90-minute dilemma that the great Sherlock Holmes would surely deem to be not-so elementary as he attempted to sort through its many piece parts.

By now you’re probably wondering what it's about. Here’s the best, basic, one-line summary I can think of: A young, married woman who feels trapped and lost in the life she’s living is asked a not-so-innocent question by a stranger she meets at a dinner party – “What do you do for a living?” – and the resultant existential quest to answer him takes her on a personal journey (real or imagined) she never expected.

Yes, that’s vague. Purposely so. But bear with me.

As I was shaving this morning and processing what I had seen the night before, a thought popped into my head that doesn’t really explain the details of the plot, but rather the show’s unusual concept and the form Maxim uses to tell his story. So here goes:

Imagine you’re a young college student sitting alone in a dimly lit, somewhat-seedy bar located in an old, run-down neighborhood few people frequent. It’s early evening, the sun has just gone down, when in walks author L. Frank Baum. He stops after taking a few steps inside, and once his eyes are adjusted to the darkness, he spots fellow-author Lewis Carroll sitting alone and nursing a drink. So he walks over, is invited to sit down, and the two begin a quiet, yet animated conversation. Within minutes, from another room inside the bar, walk Anton Chekov, Henrik Ibsen, Bertolt Brecht and Samuel Beckett. The two groups spot each other immediately, say their hellos and quickly grab a large, round table close to where you’re sitting. As the night progresses, drinks flow freely, tales tall roll off their tongues, and – thanks to the liquor taking its toll – an amusing challenge is suggested. "Just for the fun of it," one says to the others, "let’s take the archetypal characters of Dorothy and Alice on a self-exploratory journey unlike any other, one in which she’ll find herself surrounded by people and set in unique situations and places only those of us at this table could concoct for her." They all love the suggestion, of course, and the ideas quickly percolate. As the evening gets later and the stack of empty booze bottles grows larger, the story takes shape. Intrigued by what he observes is a lone figure sitting at the bar. But when the authors hit a stumbling block, the gentleman stands up, pays his bar tab, slowly saunters towards the group, offers a suggestion, and leaves. “Tennessee Williams, you’re a genius,” the six laugh. At dawn, the now-sleepy men rise from their now-filthy table and walk out into the sunlight, pleased with themselves and the story they created – knowing and accepting that it would never be told again. What they don’t know, however, is that the young man sitting nearby absorbed every word he heard. And he knows a time will come to bring their unusual tale to life.

While that scenario didn’t actually play out, of course, it helps explain what happens when concepts and elements of such childhood favorites as “The Wizard of Oz” and “Alice’s Adventures in Wonderland” are ripped apart and reshaped through the lenses of authors who worked in a handful of different, specific genres of Maxim’s choosing. The result, then, is a story told through four short acts staged and performed in four very different styles of theater.

As such, like every absurdist play you’ve ever attended, patrons will leave the theater unsure of what they’ve seen. They’ll have questions – possibly lots of questions. But that’s what good theater is supposed to do: challenge you and leave you to resolve unanswered questions for yourself.

For as it became clear at the talk back, no one – not even the actors in the play – viewed or interpreted the script the same way. Identical conclusions were never drawn. And I suspect absolutely no one in the audience anticipated the show’s final act.

Although our discussion about the play took us almost all the way home, my friend sat quiet as we drove the last few miles. As we approached my driveway, he looked at me and said, “I’ve changed my mind. I really liked the play.”

I did, too, although I still haven't resolved all of my unanswered questions. I also loved the performances – all of them, none of which I’ll talk about individually because it would be unfair to discuss one or two and not the others. Plus, this isn't meant to be a review. But I will say that because of the style changes required of each act, each actor was faced with the difficult task of figuring out how to negotiate each new change without negating what went on before. And they did so quite masterfully. And entertainingly.

Now, there’s only one question left to answer: Will YOU like the show? Maybe. Maybe not. One person I talked to hated it. But I suspect anyone one who loves theater that is different and unique and is open to work that challenges its audience to pay close attention and sort through its many details will find it intriguing. And fun. And thought provoking. And timely. And well acted. And well costumed.

Or: Just go to see ripped Brenton Herwat in a very shiny, skimpy, revealing outfit. I'm OK with that, too. (How Tiaja Sabrie kept a straight face at certain times is beyond me! A WILDE-r Award would surely be given them if such a thing still existed!)

“Lost in 3 Pines” runs through Aug. 5.  Show details can be found here: 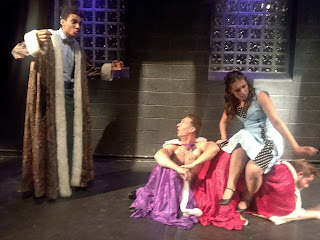 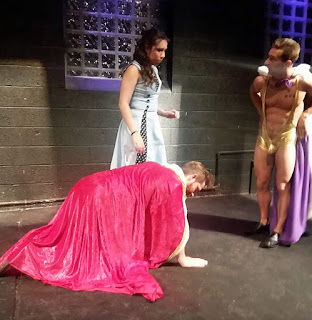 (Photo at top by Jan Cartwright; all others by Nick Rowley.)